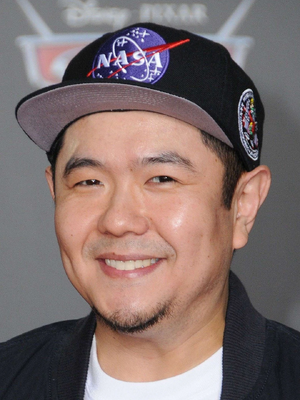 Eric Adrian Bauza (born December 7, 1979) is a Canadian-American voice actor, comedian and animation artist. His roles include Stimpy from Ren and Stimpy, Rudolfo Rivera/White Pantera from El Tigre: The Adventures of Manny Rivera, Foop from The Fairly OddParents, Lord Stingray from Superjail!, Chairman Drek from the 2016 Ratchet & Clank game, the Beagle Boys from DuckTales, Master Frown from Unikitty!, Flip Champion on Ballmastrz: 9009 and Leonardo in Batman vs. Teenage Mutant Ninja Turtles. He is also one of the current voices of Bugs Bunny, Daffy Duck, Tweety, and Barnyard Dawg.

Bauza is of Filipino descent.[1][2] He stated that watching Mr. Dressup while growing up inspired his creative side; Bauza would draw with the host of the show while he was watching it.[3]

Bauza started his career in animation as a character designer in Hollywood.[1]

Bauza has appeared in El Tigre: The Adventures of Manny Rivera, The Fairly OddParents, Ren & Stimpy, Coconut Fred's Fruit Salad Island, G.I. Joe: Resolute and Hero: 108. He has also played multiple roles on "The King and Us", a web-series sponsored by Burger King, and was seen on the NFL during Fox's pre-game show.

Bauza is the voice of Lord Stingray on the Adult Swim series Superjail!]], Marvin the Martian on The Looney Tunes Show and Dr. Psychobos on Ben 10: Omniverse. He also appeared in episodes of the animated web series Dick Figures, where he voiced the Genie of the Teapot, the Vulgar Mall Santa, and the Ninjas. He has also been the voice of Lord Takagami, the main antagonist of Dick Figures: The Movie. He played Buhdeuce in Breadwinners and the title character in Netflix's The Adventures of Puss in Boots.

Bauza has performed stand-up comedy at the Laugh Factory in Los Angeles.[5]

Bauza has voiced characters including Bugs Bunny (making him the 7th person to voice the rabbit and the first of Asian descent), Daffy Duck, Tweety, Marvin the Martian, and Barnyard Dawg. He also voiced Rash in the 2020 version of Battletoads.[6][7] Bauza was briefly a late night talk show host on The Late Night Show Tonight.

On March 23, 2021, Bauza appeared on the ABC game show To Tell The Truth and performed in his Looney Tunes voices.[8][9]

Community content is available under CC-BY-SA unless otherwise noted.
Advertisement