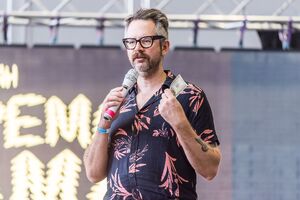 John F. Ryan IV (born November 30, 1970 in Boston, Massachusetts)[1][2] is an American alternative comics creator. He created Angry Youth Comix, a comic book published by Fantagraphics, and "Blecky Yuckerella", a comic strip which originated in the alternative newspaper the Portland Mercury and now appears on Ryan's website. He also created Pig Goat Banana Cricket, a TV show made jointly with Dave Cooper that Nickelodeon picked up. He is now the story editor for Looney Tunes Cartoons. In a throwback to the days of underground comix, Ryan's oeuvre is generally an attempt to be as shocking and politically incorrect as possible.

Ryan grew up in Boston, and studied English literature at the University of Massachusetts Amherst.[2]

Ryan originally self-published Angry Youth Comix, producing eleven mini-comic issues from 1994 to 1998.[3] In 1998, he began showing his work to Peter Bagge, creator of Hate comics, who introduced the material to Eric Reynolds of Fantagraphics.[3] In 2001, Fantagraphics began publishing volume 2 of the series.[4]

Collaborating with Dave Cooper under the pen name "Hector Mumbly",[2] Ryan's comics appeared in nearly every issue of Nickelodeon Magazine. Cooper and Ryan also collaborated on a "Wonder Woma vs. Supergirl" story for the DC Comics anthology Bizarro. Ryan collaborated with Peter Bagge in both Angry Youth Comix and Bagge's Hate Annual, in addition to penciling and inking two stories for Bagge's DC series Sweatshop.[2] In 2006, Ryan guest-edited a special comics issue of Vice magazine, which included contributions from over thirty of Ryan's comics contemporaries.[5]

His comics have been translated into Spanish, Portuguese,[2] and French.[6]

Ryan lives in Los Angeles. He is divorced and has one daughter.[2]

Angry Youth Comix was nominated for a Best Mini Ignatz Award at the 2000 Small Press Expo. It has since been nominated for multiple Harvey and Eisner Awards.[2] "Prison Pit" won an award for "Best Lettering" at the Stumptown small press festival in Portland, OR in April 2011.

Community content is available under CC-BY-SA unless otherwise noted.
Advertisement